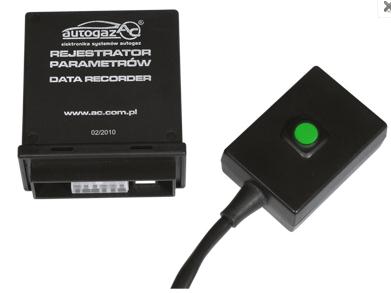 Data Recorder by AC S.A. was deigned to record LPG controller’s data (STAG-200, STAG-300, STAG-300 Plus, STAG-300 Premium, STAG-4) during the routine vehicle exploitation. It is the LPG system’s “Black Box” which communicates with the ECU by connecting to its diagnostic outlet and the + cable (red) at the ignition. The data is recorded on a memory card in .osc format and it can be opened in AcGasSynchro by choosing “Recorder”.

The Data Recorder also creates the event registry containing information about the time of particular event and its description.

Recording begins from the moment the engine is ignited and continues even after the loss of power. Additionally, there is an option to record particular event by pressing the button fitted in the driver’s cabin. In case of LPG system malfunction (e.g. the engine shut off on LPG) the particular moment can be marked in the recorder by pressing the button, along with the current date and time. This helps to analyze the marked recorded data and detect the cause of installation malfunction. Transfer of the data can be done by USB port where The Data Recorder is recognized by the computer as an external hard drive and the data can be copied for future use. There is a 2 GB memory card (updatable to 4 GB) used in the recorder, so it can also be used as Pen-drive. There are two LEDs (green and red) signalizing the working state of the devise. The green diode signalizes the on going data recording process and the potential lack of communication with STAG and red diode signalizes possible errors.